A picture has surfaced on the internet in which BJP spokesperson Sambit Patra can be seen writing something on the paper.
The text on the paper in Hindi suggesting to be written by Patra reads: “चोकीदार चोर ही नहीं महाचोर है।” 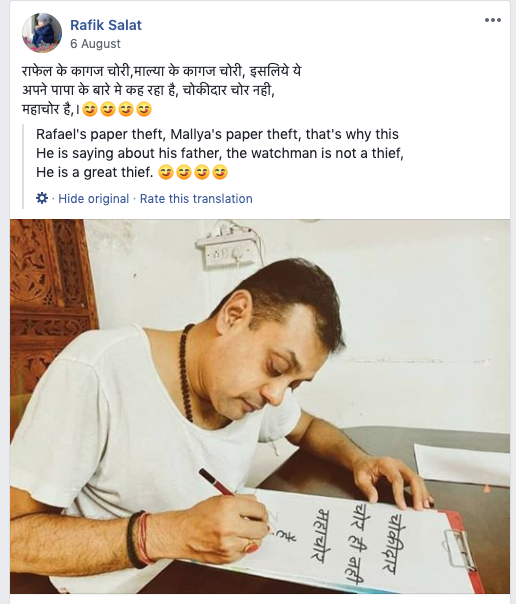 NewsMobile fact checked the above post and found the picture to be FAKE.
On putting the picture through a Reverse Image Search, we found the original picture which was tweeted by Patra himself.

Thought of paying a special tribute to the “First Freedom Fighter” of India ..LOKMANYA …
So drew a pencil sketch of his ..
Felt good taking back to one of my hobbies after years …#LokmanyaBalGangadharTilak pic.twitter.com/WVWO1aXjfi

In the above FAKE vs REAL collage, it is clear that the Bal Gangadhar Tilak’s sketch was replaced by the text using photo editing software to create a false narrative.
In conclusion, the above information proves that the picture in question is FAKE.

Fact Check: Here's the truth behind this morphed picture of PM Modi wearing a skull cap

Fact Check: Don't fall for this picture of PM Modi, Mohan Bhagwat, Amit Shah, together in a group