A picture claiming to be the autopsy report of Bollywood actress Sridevi is being circulated all over social media. The report claims that the actress passed away due to toxic reactions from external toxins injected into her body.
The Facebook caption read, “Postmortem report of actor Sridevi.”
Postmortem Report read, “Documented For Records
Autopsy and Postmortem Reports state the Following
Sreedevi Boney Kapoor Ayyapan resident of India wearing Passport No IND- Z 4231524 passed away due to toxic reactions from external toxins injected and not naturally encountered it’s type 3 Hemo Toxic Venom and the blood samples also show Cocane and Lime Juice with whiskey traces in the lungs(Clearly Forcefully Fed).
Three injuries 1. On the head 2. Near the Palm veins 3. On the Diaphram
Conclusion: Not a natural death and the body shows no signs of bloating to emphasise that the victim was thrown into the bath tub when there was no pulse (Clinically Dead)”

Other similar posts on Facebook were seen here, here and here.

NewsMobile fact-checked the above post and found it to be false and misleading.
With the help of keywords search, ‘Sridevi postmortem’ we found the real postmortem report of Sridevi posted by ANI claiming that Actress Sridevi died from accidental drowning.
Actress Sridevi postmortem report read, “This is to inform that
Name: SREEDEVI BONEY KAPOOR AYYAPPAN
Gender: FEMALE
Nationality: INDIA
Passport No.: IND-Z 4231524
Died on 24/2/2018
Due to ACCIDENTAL DROWNING”

Also, we found another tweet by Dubai Media office stating that the death of Indian actress Sridevi occurred due to drowning.

Following the completion of post-mortem analysis, @DubaiPoliceHQ today stated that the death of Indian actress Sridevi occurred due to drowning in her hotel apartment’s bathtub following loss of consciousness.

On digging further, we found an article on Economic Times dated February 26, 2018, claiming that actress Sridevi’s forensic report was released stating that she died of accidental drowning in her hotel bathtub after losing her consciousness. 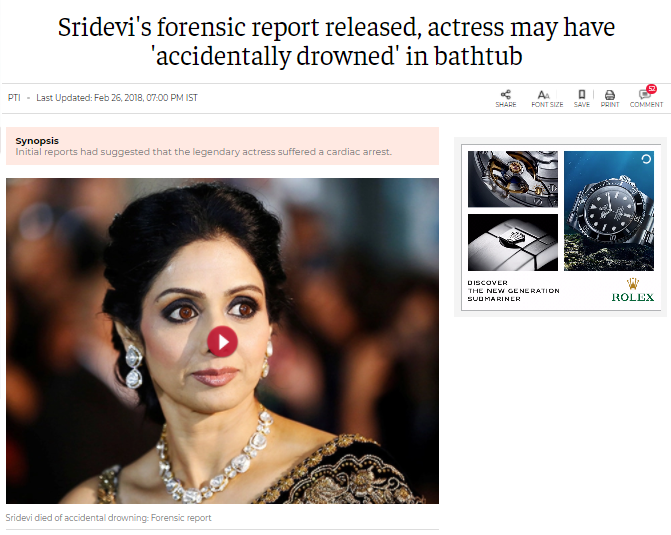 Other news articles published in India Today and First Post claimed that the death certificate says that actress Sridevi died due to ‘Drowning’ in the hotel bathtub.
Further, with the help of Fake Vs Real collage, we can clearly see that the claims in the real postmortem report and the fake postmortem reports are different. 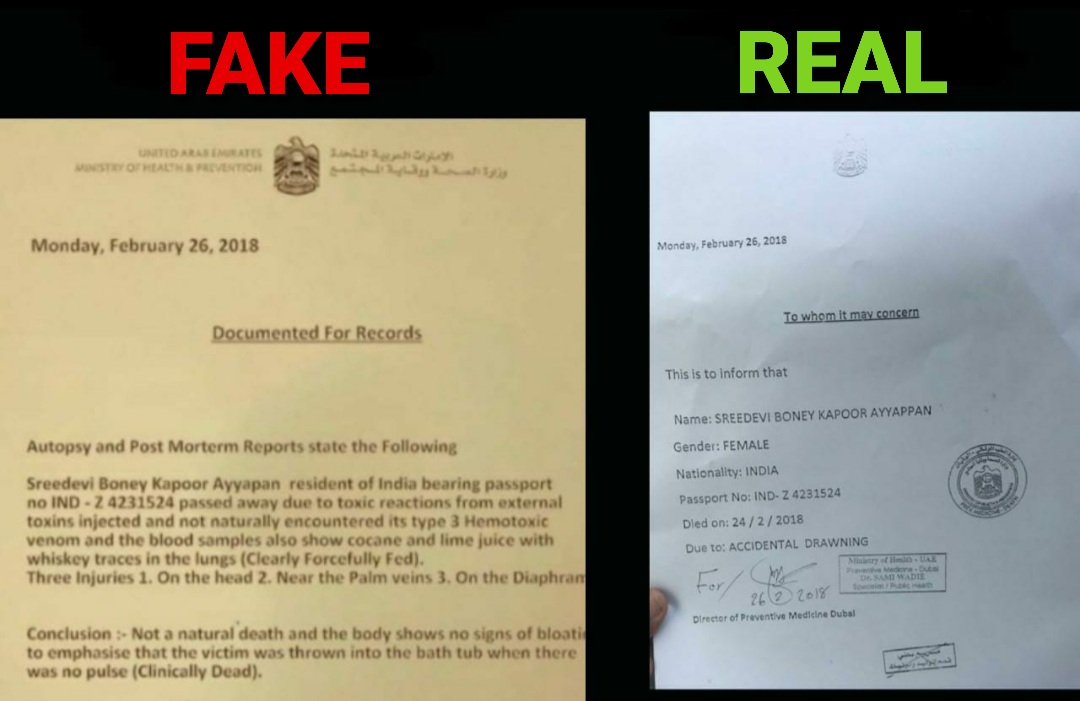 Hence, with the help of the above information, it is clear that the postmortem report of actress Sridevi on social media is false and misleading.