As the countdown for US Presidential Polls gather steam, a quote attributed to US Vice Presidential candidate Kamala Harris is being circulated on social media claiming that in June 2019, Kamala Harris had said that Joe Biden is ‘trash’ to her. Harris incidentally is Joe Biden’s running mate this election.
The Facebook post read: “I don’t like Joe Biden and do not like his history with certain people or who he’s aligned with, he’s trash to me” -Kamala Harris 06/2019 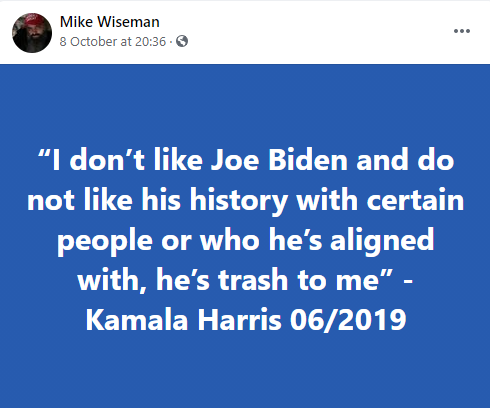 NewsMobile fact-checked the post and found the claim to be false.
Since the post mentioned that the quote was said in June 2019, we ran an advance search using the keyword ‘Kamala Harris and Joe Biden June 2019 ‘and found the video of the first Democratic debate that took place on June 27, 2019.
During the course of the debate, Kamala criticised Biden over several issues including racism.
“… and I’m going to now direct this at Vice President Biden, I do not believe you are a racist, and I agree with you when you commit yourself to the importance of finding common ground.
But I also believe, and it’s personal — and I was actually very — it was hurtful to hear you talk about the reputations of two United States senators who built their reputations and career on the segregation of race in this country. And it was not only that, but you also worked with them to oppose busing.
And, you know, there was a little girl in California who was part of the second class to integrate her public schools, and she was bussed to school every day. And that little girl was me.” she said during the debate.
The video clip of the above statement can be seen in this report by CNBC, dated June 27, 2019.

The transcript of the entire debate can be seen here.
However, after analysing the entire debate carefully, we did not find the quote in question. We also analysed several other speeches by Senator Harris from that time till now, but did not find that specific quote.
We then ran a keyword search on the quote, which lead us to a blog post dated June 28, 2019. The blog post (archived) titled, ‘Kamala Harris Buries Joe Biden’, expresses the author’s views on the first primary Democratic debate. 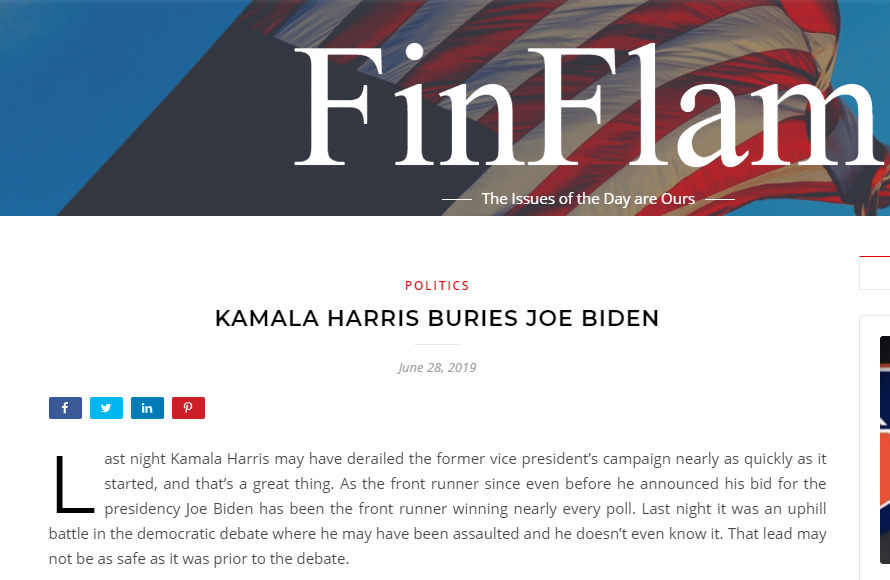 In the blog post, the author wrote: I don’t like Joe Biden and do not like his history with certain people or who he’s aligned with, he’s trash to me. However, with that being said, Biden maybe someone I don’t like but he does make a legitimate point when dealing with horrible people. Kamala may be taking shots for political gain and personal ones at that but what happens if she’s president?
From the above information, it is clear that the quote has been picked up from a blog post and has been falsely attributed to US Vice Presidential candidate Kamala Harris. Hence, the post in question is false.