The crowd was not cheering after seeing the exit polls; here's the truth behind this viral video

After the exit polls came out on May 19th, a video is being shared on different social media platforms in which a crowd can be seen cheering in enthusiasm after seeing the exit poll result of the 2019 Lok Sabha election.
The caption of the video read- “BJP supporters watching #ExitPoll2019 @ London
पता नही आज तक विदेश में दूसरी पार्टी के समर्थक नही देखा आज तक , आखिर क्यों?”
(Translation- BJP supporters watching # ExitPoll2019 @ London. Never seen this kind of support for any other party in a foreign country) 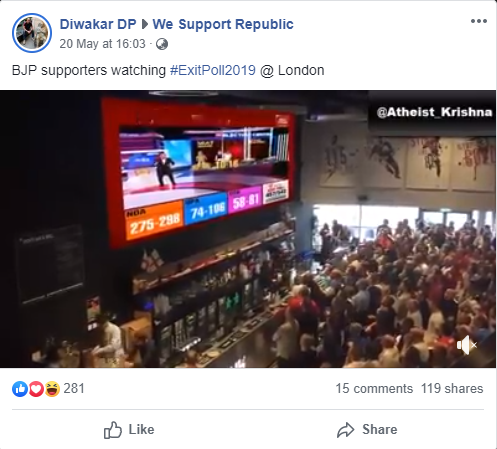 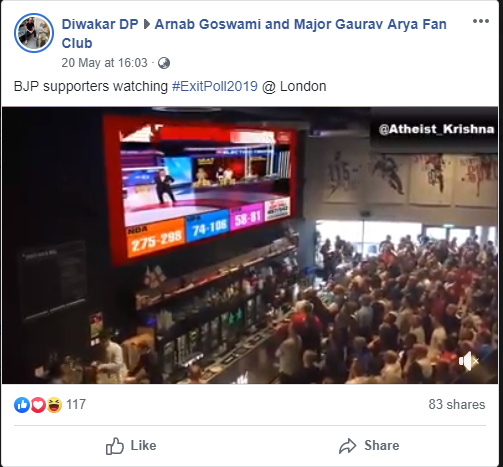 When the team of fact-checkers at NewsMobile did a fact check on the video, we found that the video is morphed and the claim is FAKE.
On putting some screengrabs of the crowd in the video through Reverse Image Search, we found the original video on YouTube.
The description of the video reads- “Fans at Ashton Gate Stadium, Bristol, celebrate England winner against Wales at Euro 2016”

Hence, it proves that the video is morphed and the claim is FAKE.

No! The claim attached to this video is FAKE

Sanjay Dutt didn't convert to Islam; here's the truth behind this viral picture