NO! These pictures are not of Ethiopian Airline plane crash

After the deadly Ethiopian Airline plane crash, that claimed 158 lives, a few videos have been making rounds on social media claiming to be of the crash.
“The original Short Clips of the Disastrous Plane Crash ( Ethopian Airline)
All 157 people aboard an Ethiopian Airlines flight that crashed soon after taking off Sunday morning from Addis Ababa have been killed, the airline said Sunday.
The plane, en route to Nairobi, Kenya, lost contact at 8:44 a.m. local time, six minutes after taking off from Bole International Airport in the Ethiopian capital,” the caption read.

Another Facebook user shared multiple videos with the same captions. 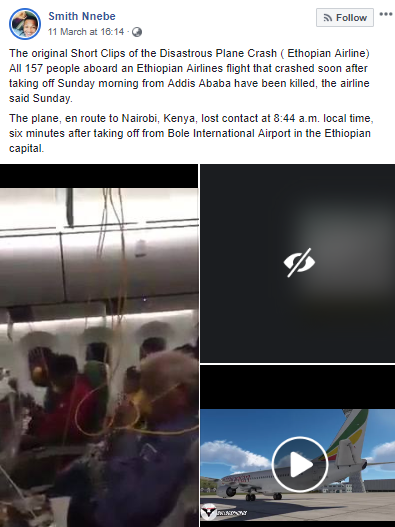 FACT CHECK
When we put the Screengrabs of the Video through the Reverse Image Search tool, we found out that it’s an old video.
The video is from 2013 when a civilian cargo aircraft Boeing 747 crashed inside the boundaries of Bagram airfield, a US-run base which is a key transport hub for US-led military operations in Afghanistan.


The second video uploaded by a Facebook user was also present on the youtube under the title “Ethiopian Airlines B737 Crashes After Takeoff Ethiopia Airlines Flight 409 | X-Plane 11.”
However, the description of the video clarifies that the situation is not real. “This situation is only in the flight simulation. This isn’t real situation and it’s not original, ” the description read.

This proves that the videos are not from the recent Ethiopian crash.

This girl is not holding this placard; Here is the fact check