Fact Check: Were people in Bihar chasing gangs on the streets? Find out the truth behind this viral video

A video of a huge crowd gathered on a tractor has gone viral all over social media claiming to be from Bihar.
The Facebook caption read, “சங்கிகளை தெருவுக்கு தெரு விரட்டி அடிக்கும் பீகார் மக்கள்”
(Google Translate: Bihar people chasing gangs from street to street) 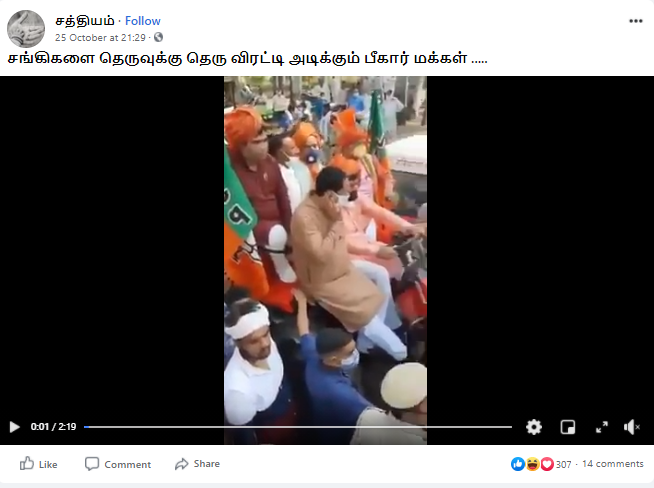 Other posts were found here, here, here and here.

NewsMobile fact-checked the above post and found it to be false and misleading.
With the help of InVID tool, we got the keyframes of the video. On putting one of the keyframes of the video through Google Reverse Image Search, we found that the same video was shared by a Twitter user dated  October 17, 2020, claiming that BJP’s popularity has skyrocketed in Punjab and Haryana.

BJP’s popularity has skyrocketed in Punjab and Haryana. To the extent its leaders can’t move around without Police Protection. pic.twitter.com/66mB8mvtht

Moreover, we also found that several users shared the same video on Facebook claiming that the video is from Haryana. The Facebook users sarcastically asked the people of Bihar to see how farmers from Haryana were supporting BJP.

We also analysed the viral video carefully and found that a man was shouting ‘Rattan Lal Kataria’, who is an Indian politician from Haryana.
Also, in one of the keyframes ‘Haryana Police’ was imprinted on the police vehicle. 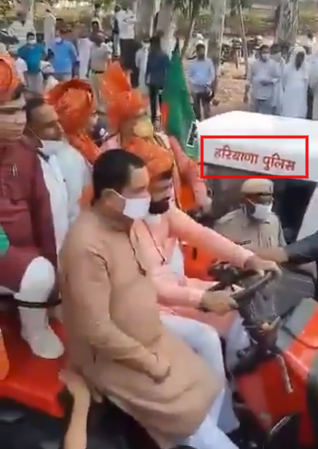 With the help of keywords search, we also found a news report by The Tribune on YouTube dated October 14, 2020, claiming that farmers blocked BJP rally in Ambala and showed them black flags.
YouTube description read, “A tractor rally by Bharatiya Janata Party (BJP) leaders, including Ambala MP Rattan Lal Kataria, Kurukshetra MP Nayab Saini and Ambala BJP chief Rajesh Batoura, faced a massive protest from farmers in Naraingarh against the three controversial farm laws. The BJP commenced the rally with 150 tractors from Saini Dharmashala in Naraingarh. A few kms down the road, farmers led by BKU (Charuni) district chief Malkeet Singh blocked the way near Milan Palace. After brief parleys with BJP leaders, farmers cleared the way an hour later but on one condition: black flags should be fixed on tractors.” 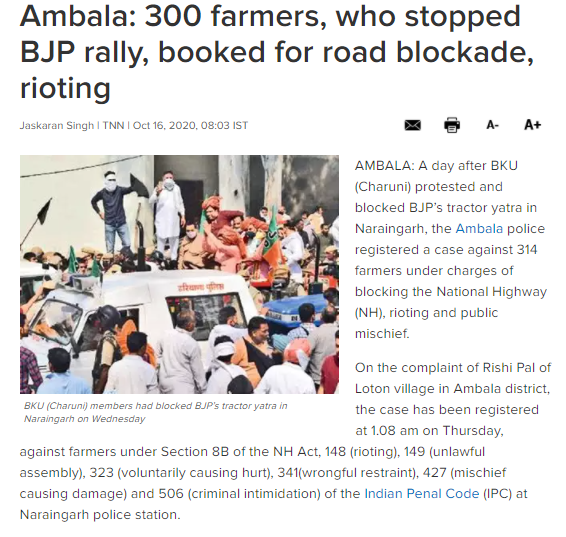 Other news articles like Business Standard, Outlook and The Week reported the ‘tractor rally’ led by Ambala MP Rattan Lal Kataria and Kurukshetra MP Nayab Singh Saini in Haryana.
Hence, with the help of the above information, it is clear that the video of the rally is from Haryana and not from Bihar. Don’t fall for false and misleading claims.