Fact Check: Old video of shoplifting in London being recirculated in India with fake claim

A video of two burqa-clad women pulling out shoplifted items from under their burqa is doing the rounds on the internet. It is being claimed that they were taking ‘iftar’ for Ramadan.
The caption of the post read: “रमज़ान चल रहे है,,रोज़ा अफ्तारी के लिए, कुछ सामान लिया था। काफिरों ने — बुर्खे में से भी निकलवा लिया। क्या अब भी आप इनको सिर पर बैठाओगे– इतने सहिष्णु मत बनो इन्होने पूरे देश को खतरे मे डाल दिया ओर आप शर्म करो नही तो चुलू भर पानी मे वन्दे मातरम् मंच 👇🏻👇🏻”
(Translation- Ramadan is going on, took some stuff for Rosa Aftari but these infidels took them out from under the burqa too.
Do not be so tolerant, they put the whole country in danger, if you’re not ashamed then you should drown in water. Vande Mataram)

NewsMobile fact-checked the above claim and found it to be FAKE.

When we extracted the keyframes of the video through InVid and put them through Reverse Image Search, we found a report by a UK tabloid, The Sun, dated August 7, 2019, featuring the same video.
The headline of the article read, ‘SUPERMARKET SWEEP Bizarre moment two women are ‘caught using Muslim dress to try to steal baby formula in Asda’. 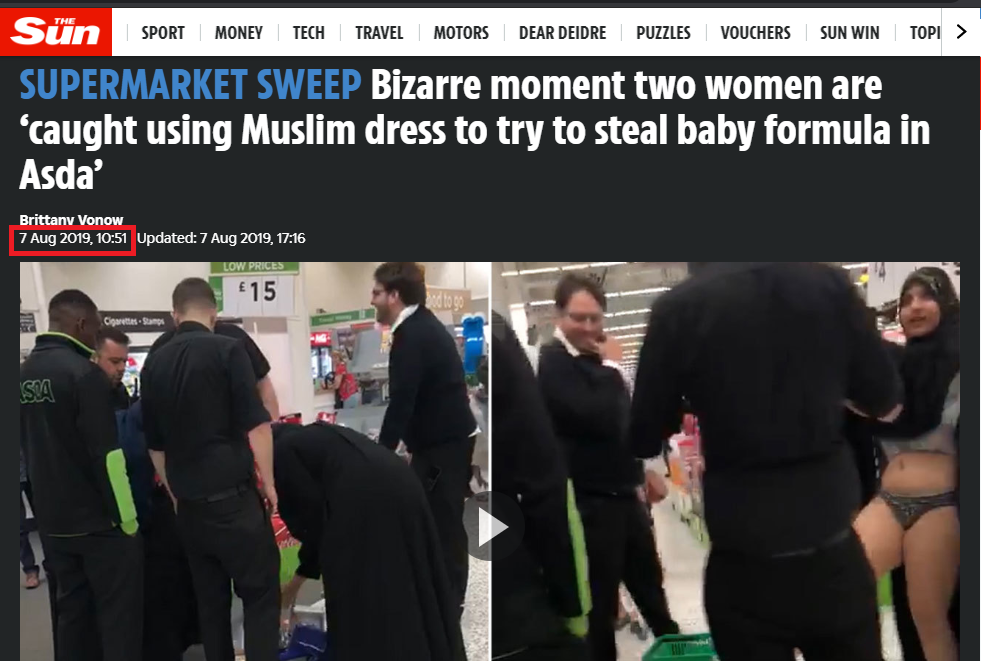 According to the report, the police was investigating the footage of two women who were ‘disguised as Muslim women’ and were allegedly trying to steal items on August 4, 2019, from an Asda store in East London, by hiding them inside their robes.
The incident is also covered by another UK daily, Evening Standard. Read the report here.
Hence, the above information proves that the video being circulated is old and not from India.

RSS chief Mohan Bhagwat did not say that Coronavirus broke his faith; here's the fact check

Fact Check: OLD video of a crowded mall in Saudi Arabia being shared as a recent one