“You are ashamed to see me naked, but you are not ashamed to see your country naked, barefooted, desparate, jobless and hungry whose money you have striped, plundered and stolen so that you can live in complete luxury with high wages and enjoy with your families”
What a courageous man !!”  the post caption read. 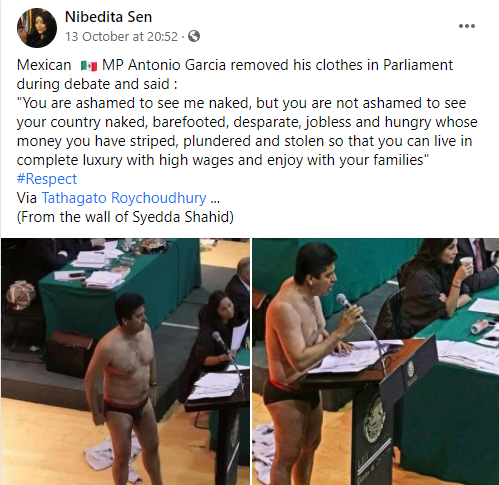 NewsMobile fact-checked the post and found it to be old.
On putting the picture through Reverse Image Search, we found a report by BBC dated 2013, featuring the same picture.
“MP Antonio Garcia took off his clothes in Congress to denounce “the stripping of Mexico’s oil wealth,” the picture caption read.
Related Posts
English 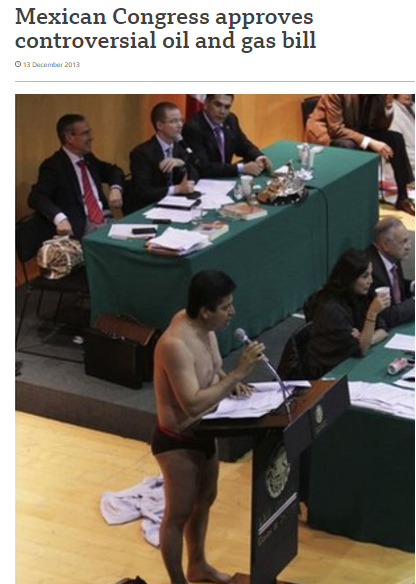 MP Antonio Garcia Conejo, from the PRD (Party of the Democratic Revolution), stripped down to his underwear to show his rejection of the bill that was passed by the Congress. The new energy law allowed private oil and gas companies to drill for oil and gas with the state-run firm Pemex in exchange for a share of the profits.
We also found a report by India Today dated December 13, 2013, titled, ‘Mexican Congressman Antonio Garcia Conejo strips to protest energy privatisation bill’. 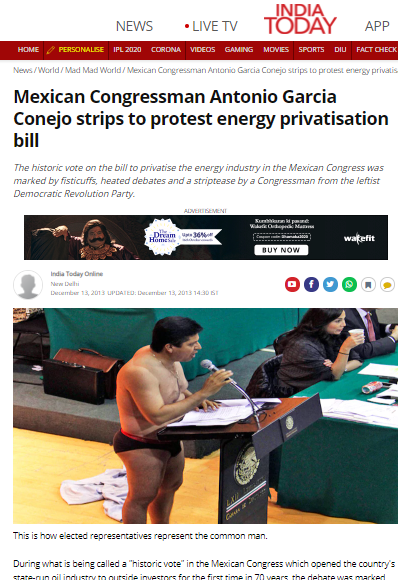 “This is how you’re stripping the nation. Where is the benefit? How shameful! But this doesn’t embarrass me,” India Today quoted him as saying.
We also found a video on YouTube.
However, since the video was in Spanish, we used Google’s Live transcription app to understand what he was saying and then translated it. However, the quote attributed to him in the viral posts were not found.
We also translated the YouTube auto-generated captions of the video to English but did not find that statement.
Hence, based on the above fact check, we can say that an old picture of Mexican MP Antonio Garcia Conejo is being shared with a misleading context.

Fact Check: Was Rahul Gandhi listed as the seventh most educated leader by Forbes? Here's the truth

Fact Check: UPSC has NOT changed the age limit for General category candidates