Fact Check: Is the man in the picture with BJP leaders the father of Hathras accused? Here's the truth

A picture of a man with Prime Minister Narendra Modi, UP Chief Minister Yogi Adityanath and several other BJP leaders is being shared on social media with a claim that he is the father of Sandeep Thakur, one of the key accused in the Hathras rape and death case.
“लाल घेरे में संदीप ठाकुर का पिता!! तभी तो आधी रात को पीड़िता का शव जलाया गया ताकि सभी सबूत मिट जाए और अपराधी बरी हो जाएं” the post claimed.
(Translation: Sandeep Thakur’s father circled in red!! That’s why the victim’s body was burnt at midnight so that all the evidence would be erased and the culprits would be acquitted.) 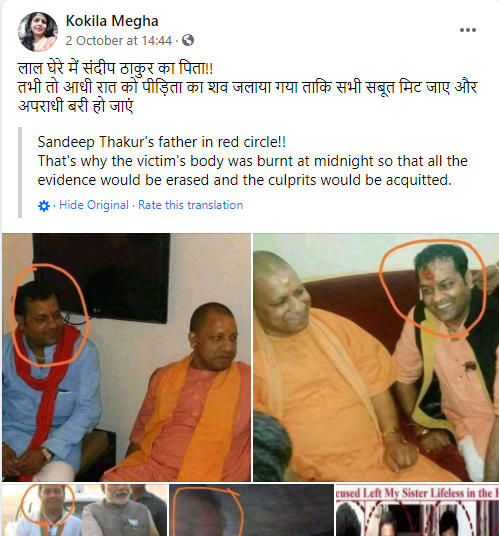 Here’s the link to the above post.
More similar posts can be seen here, here and here.

NewsMobile fact-checked the post and found it to be false.
On putting the picture through Reverse Image Search, we found the same picture in an article dated September 16, 2020.
According to the report, the man in the picture is BJP leader Shyam Prakash Dwivedi, who has been accused of allegedly raping a girl at gun point in Prayagraj in 2019. 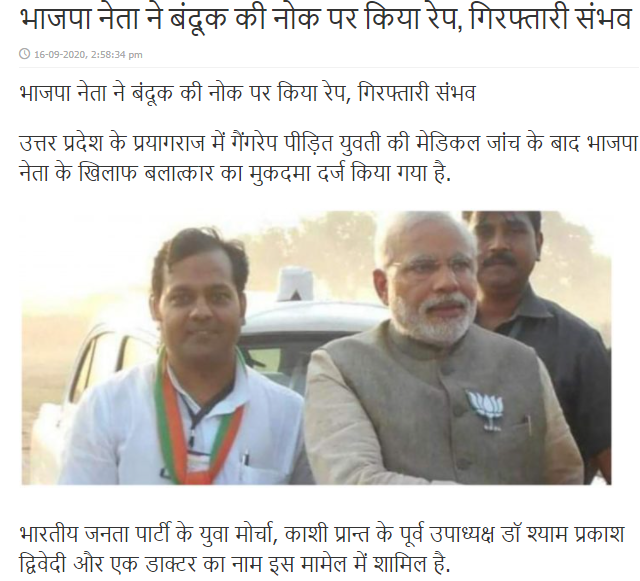 Based on the information available, we ran a keyword search and found multiple reports stating that on September 16, Prayagraj Police registered a case against a BJP leader and a doctor and accused them of raping a BA girl student in Prayagraj. The reports can be seen here and here.
On further search, we found the same pictures on Dwivedi’s Facebook page.


Moreover, according to a report by The Hindu,  the name of Sandeep’s father is Narendra.
Hence, from the above information, it is clear that the man in the picture NOT related to  the Hathras Case.