A video of BJP leader Khushbu Sundar slapping a man for misbehaving with her is being shared on social media after she quit the Congress recently and joined the BJP.
The Facebook post read, “குஷ்பு விடம் தவறாக நடக்க முயன்று அடி வாங்கிய பாஜக வினர்”
(Translation: BJP winner who tried to mislead Khushbu)

NewsMobile fact-checked the above post and found it to be misleading.
With the help of keywords, ‘Khushbu slaps man’, we found a news report on YouTube by India Today dated April 12, 2019. According to the report, Khushbu slapped a man for misbehaving with her during a road-show in Bengaluru. At the time of the incident, she was still in the Congress Party.

Moreover, we also found the same video of Khusbu Sundar on Bangalore Mirror dated April 11, 2019, claiming that the actress Khushbu Sundar slapped a youth who was misbehaving with her during a Congress rally in Bengaluru. 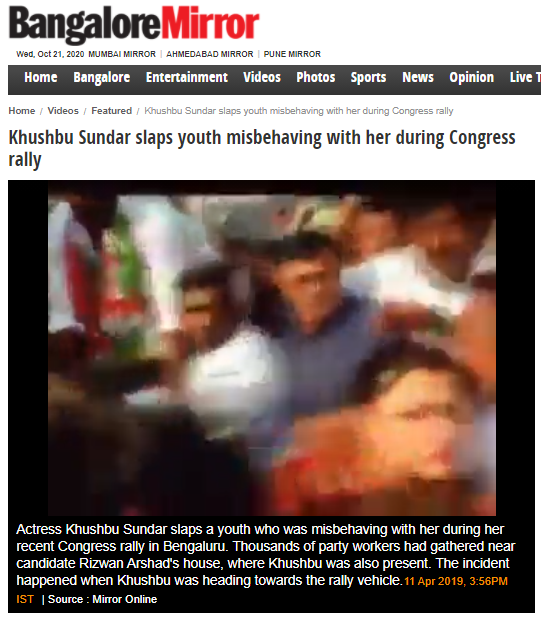 Other news organisations like The Hindu, Deccan Chronicle, The Quint and Coastal Digest reported the same incident in April 2019.
Hence, the video in circulation is old when Khushbu Sundar was in the Congress Party and not a recent one. Don’t fall for misleading claims.

Fact Check: No, this ecological bridge has not been constructed on Delhi-Mumbai Expressway; here's the truth

Fact Check: 2018 newspaper clipping of a teenager offering eyes to goddess Durga shared as recent one