Argentinian football legend Diego Maradona passed away recently due to cardiac arrest at the age of 60. As soon as news of his death became public, famous singer Madonna began to trend on Twitter as people misread the footballer’s name and tweets began circulating about ‘RIP Madonna.’
In the midst of this confusion, a screengrab of US President Donald Trump’s tweet went  viral on social media. The tweet displayed his condolences for the death of ‘Maradona’ but actually hinted at ‘Madonna’ and her music.
The screengrab read, “Very sad to hear about the death of Maradona. A great person. Her music was wonderful. I remember listening to her albums in the early 1980’s. Rest In Peace!”
The Facebook caption read, “Maradona not Madonna..Stupid Trump“

NewsMobile fact-checked the above post and found it to be morphed and misleading.
We got our first clue when we noticed the screengrab of the Tweet carefully and found that Donald J. Trump tweeted his condolences for footballer ‘Maradona’ but mentioned about singer ‘Madonna’ and her music albums from early 1980’s. 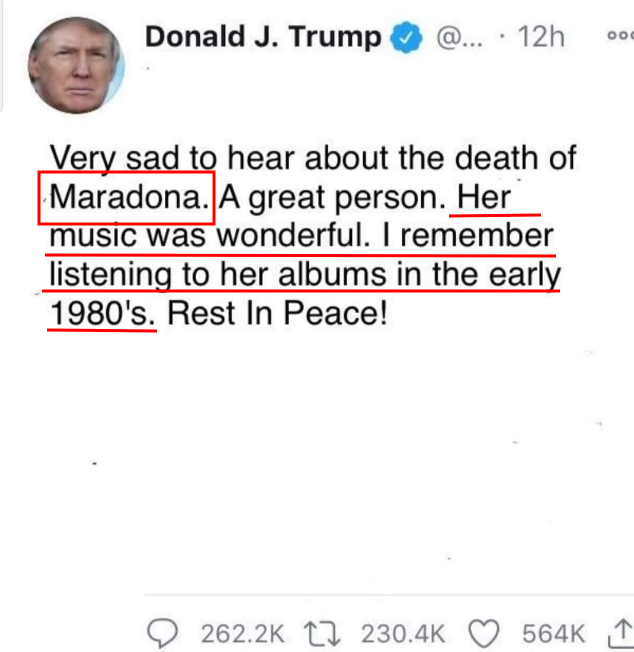 On comparing the viral screengrab with the Desktop view, Twitter Deck View and Mobile view, we can clearly spot the errors.

For further confirmation, we also checked the official Twitter account of Donald J. Trump but could not find any such recent post about Maradona’s death.
Hence, the viral screengrab of US President Donald Trump in question is morphed and misleading. Don’t fall for fake tweets.

Fact Check: No, PM Modi is NOT performing yoga in this old black & white video; Here's the truth

Fact Check: No, Pop Queen Madonna has not passed away; Here's the truth