Fact Check: 2012 video of submerged railway bridge shared as a recent one

A video of a flooded bridge is doing the rounds on social media claiming that the bridge is located along the Solapur-Bijapur route and the tracks laid on it got submerged in the gushing waters of Bheema river near Tadwal railway station.
“#Solapur_Bijapur Route Railway Bridge,Bheema River Near Tadwal Railway Station, ” the caption read.

NewsMobile fact-checked the post and found the claim to be misleading.
We extracted keyframes of the video using InVid tool and put it through Reverse Image Search.
The search let us to the same video of YouTube but from 2012. The video was titled: Tuni flood water on Tandava railway bridge.

Taking a clue from the above video, we ran another keyword search and found several media reports from 2012 regarding trains being cancelled on the Tandava bridge because rail tracks were flooded with river waters due of incessant rains.
Other reports can be seen here and here. 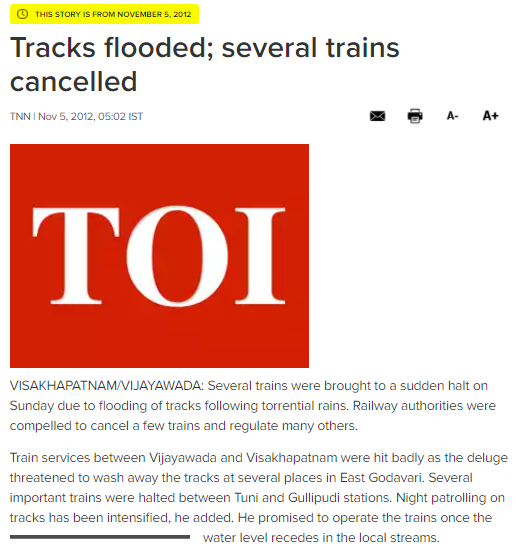 Hence, from the above information, it is clear that the video in circulation is from 2012 and not a recent one.

Fact Check: This trending video is NOT from the 2020 Bihar elections; here's the truth