2018 video of 'Dhol Tasha' performance in Spain, being shared as celebration for the construction of Ram Mandir

The foundation laying ceremony of the Ram Mandir is making headlines since a few days now. Amidst the excitement regarding the same, a video of ‘Dhol Tasha’ (drums) group performing on the streets of Spain, is doing the rounds on social media, with a claim that Indians have started celebrating in Spain.
The Facebook caption read, “Indians have already started * celebrations * in Spain on this occasion of building Rama’s temple in ram land in Ayodhya.” 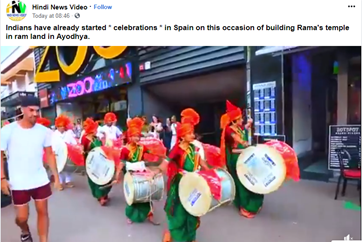 NewsMobile fact-checked the above post and found it to be false.
After breaking down the video into keyframes via InVID, we ran a Google Reverse Image Search and found a similar video on YouTube dated October 16, 2018. The video was titled, ‘Dhol Tasha on the streets of Spain(Part-1): Swargandhar Dhol Tasha Pathak’. 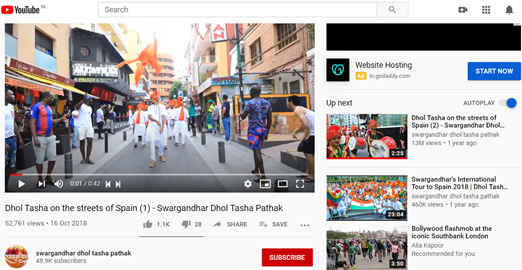 Further, we found the second part of the video in the suggestion box of YouTube that was also uploaded on the same day by the same Youtube channel. 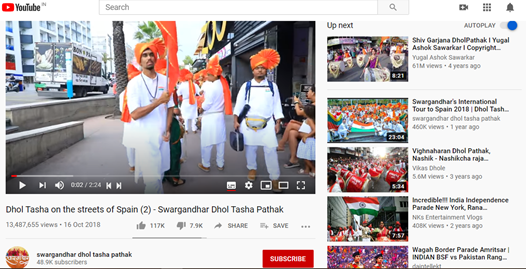 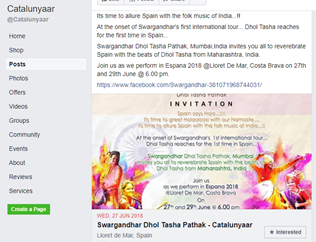 The Facebook post read: Spain says Hola…!!!! Its time to greet Holaaaaa with our Namaste…. Its time to allure Spain with the folk music of India…!! At the onset of Swargandhar’s first international tour… Dhol Tasha reaches for the first time in Spain…Swargandhar Dhol Tasha Pathak, Mumbai, India invites you all to reverberate Spain with the beats of Dhol Tasha from Maharashtra, India. Join us as we perform in Espana 2018 @Lloret De Mar, Costa Brava on 27th and 29th June @ 6.00 pm.
On the same page, we found a link of Swargandhar, which took us to the Facebook Page of the group that performed Dhol Tasha on the streets of Spain in 2018. On that page, we found a similar video that was recorded live, about 2 years ago, along with many more such videos.
Moreover, it should also be noted that during the ongoing pandemic, it is essential for every individual to wear a mask, but when we look at the video, nobody is wearing a mask.
In conclusion, the video of Dhol Tasha performance on the streets of Spain is not for the occasion of building Ram Mandir in Ayodhya. Don’t believe in the false and misleading claims made by Facebook and Twitter posts.

Bihar has NOT imposed Complete lockdown till August 16; here's the fact check