Fact Check: Video of protest in Indonesia falsely shared as that of West Bengal

As clashes broke out between BJP workers and West Bengal Police during BJP’s ‘Nabanno Chalo Abhiyaan’ earlier this week, a video started doing rounds on social media where a man can be seen kicking a tear gas canister towards the police.
It is being claimed that the video is from West Bengal and the man in the video is a BJP worker.
“Salute to BJP Cadres in West Bengal! It’s Like They are Fighting in Border with Armed Enemies! BJP Yuva Karyakarta Kicking Back Smoke Bòmb to Pavillion!” the post read. 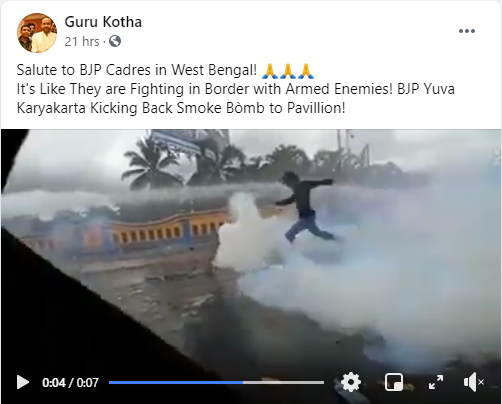 NewsMobile fact-checked the video and found the claim to be false.
We took out the keyframes of the video and put them through Reverse Image Search. The search led us to the same video uploaded on YouTube on October 9, 2020.
The description of the video in Indonesian read – ‘#Viral #beritahariini the latest news – Jebreeettttt …. Student demonstrations kicking back tear gas. (Translated via Google)

Another YouTube video can be seen here.
This gave us a hint that the video could be from Indonesia. So we ran another search along with some keywords and found that the same video was uploaded on Facebook claiming that the video is from a recent protest in Indonesia.

Hence, from the above fact check, it is clear that the video is from Indonesia and NOT West Bengal in India.