Fact Check: The man in the picture with Zakir Naik is not Sri Lanka suicide bomber

A picture of a man with Zakir Naik is going viral on social media claiming that he is the Srilankan suicide bomber.
“Sri Lanka suicide bomber with congress’s most favorite Islamic preacher Zakir Naik, ” the caption read.

FACT CHECK
When we cropped the picture and put it through Reverse Image Search, we found links to some blog posts on Yandex. Here’s the other post.
The blog post identified the man as Zamri Vinoth.
When we looked for Zamri Vinoth on Google, we found out that he is a Muslim preacher, a follower of Zakir Nair and a resident of Malaysia.
We found articles dated April 28, 2019, stating that he was detained in Perlis after a few complaints were lodged against him for insulting Hinduism during his religious talk in Kelantan. 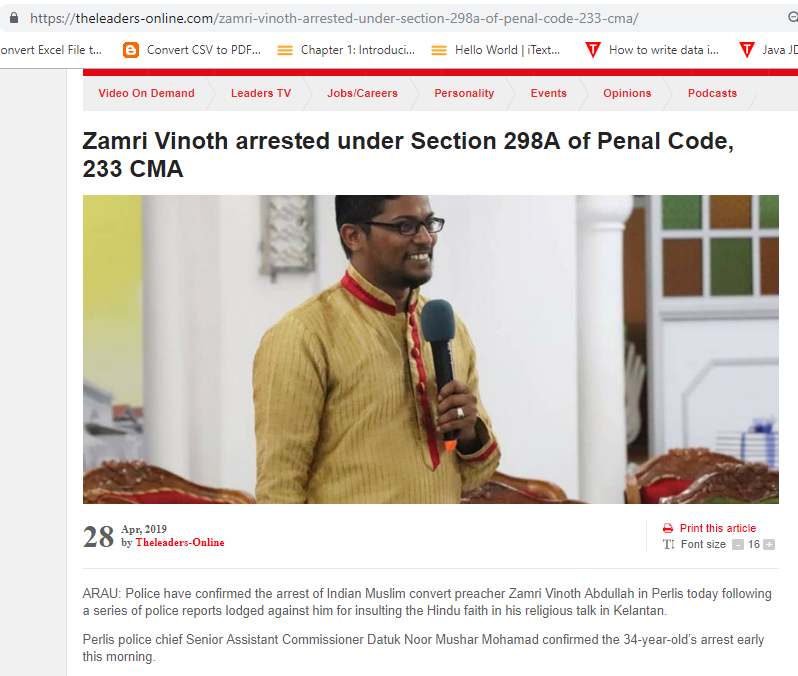 When we checked his social media accounts, we found some of his pictures with Naik, who fled India in 2016. Naik has been charged in money laundering case.

Moreover, Srilankan govt. named all the nine Easter Sunday suicide bombers and Zamri Vinoth is not on the list.
As per an article in The Guardian, eight men and one woman were named.

This proves the man in the pictures is not a Sri Lanka suicide bomber.

Continue Reading
Fact Check: The man in the picture with Zakir Naik is not a Sri Lanka suicide bomberSri LankaZakir Naik
0 66
Share FacebookTwitterGoogle+ReddItWhatsAppPinterestEmail

Did Amit Shah urge voters to not vote for Meenakshi Lekhi? Here's the fact check

No! Kanhaiya Kumar didn't campaign with a poster of Afzal Guru; here's the fact check