Fact Check: Old video of crocodile in a waterlogged street of Vadodara shared as that of Hyderabad

Following incessant rains in Hyderabad and parts of Telangana and Andhra Pradesh, that left roads and streets waterlogged, a video clip of a crocodile in a water-logged residential area started doing the rounds on social media claiming that it is from Hyderabad, the capital of Telangana.
“Watch: Crocodile spotted in floodwater In Himayatsagar, Hyderabad #HyderabadRain #Rain,” the post read. 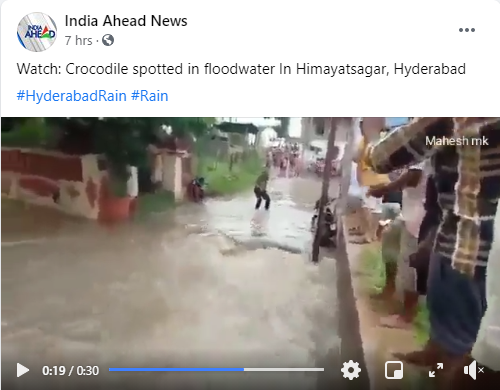 NewsMobile fact-checked the post and found the claim to be misleading.
On putting keyframes of the video through Google Reverse Image Search along with keywords such as ‘Crocodile’, ‘Rains’, ‘Drain’, we came across a video posted by The Times of India on August 4, 2019, which was shot from the same location but from a different angle.

The caption of the video read: “Due to waterlogging by the ongoing heavy rains, further incidents of crocodiles entering Vadodara’s housing complexes have been recorded. Following last week’s viral video of a crocodile attacking a dog inside Lalbaug’s Rajsthamb society, a team of rescuers captured another reptile at night from the entrance of a house.”
We also compared the video being circulated in the name of Hyderabad and the TOI report and found that they are of the same location.

We found the same video on YouTube, which was uploaded by DeshGujaratHD on August 31, 2019, claiming that a stray crocodile was captured during the Vadodara floods.

Further, with the help of keywords ‘Crocodile found Vadodara’ on YouTube, we found another video report by NDTV on August 3, 2019, claiming that a crocodile was rescued from the flooded streets in Gujarat. 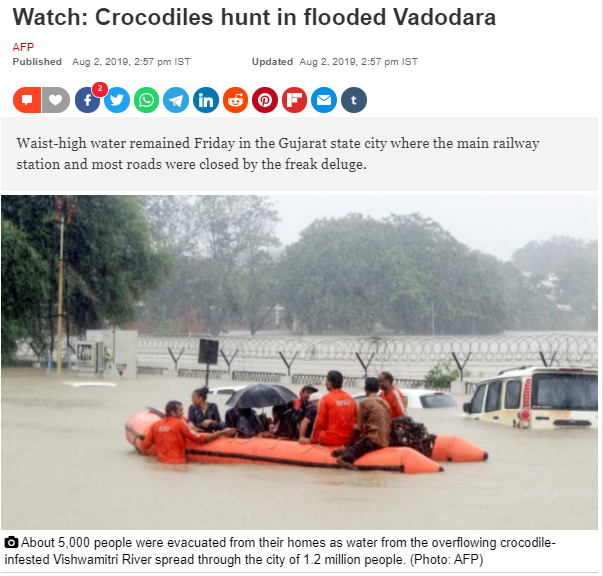 Hyderabad Police also uploaded a screengrab of the same viral video with a clarification that the claim is fake and the video is from Vadodara in Gujarat.

Earlier, NewsMobile debunked the same claim when it was being shared in the name of Bihar and Pakistan.
Hence, the video of a stray crocodile found in the floodwater is from Vadodara, Gujarat and NOT from Hyderabad. Don’t fall for false and misleading claims.