Fact Check: No, this video of 'booth capturing' is NOT from Bihar; Here's the truth

A video of a poll agent casting his vote instead of voters is being shared with a claim that the video was shot during recent assembly elections in Bihar.
“BJP voting officer… pressing button before the uneducated muslim women vote in Bihar, ” the post claimed. 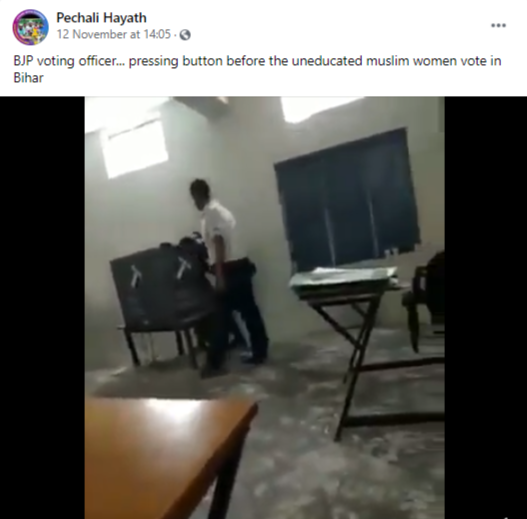 NewsMobile fact-checked the post and found the claim to be false and misleading.
We extracted the keyframes of the video and put them through Reverse Image Search. The search led us to the same video, uploaded on Punjab Kesari, on YouTube on May 13, 2019.
“Poll Agent Illegaly Caste Vote In Haryana’s Faridabad” the title of the video read.

“A polling agent in Faridabad near Delhi was arrested on Sunday after he allegedly tried to influence voters in the sixth round of national election. Action was taken against the official after a video on Twitter was brought to the notice of the Haryana election body.#2019LokSabhaElection,” the video description read.
We also found the same video in a video report by NDTV.

Other media reports on the same issue can be seen here and here.
From the above information, it is clear that the video is from 2019 General Elections and not from recent Bihar Assembly elections.
Hence, the claim being made in the post is false.

Fact Check: No, ABP News did not tweet about re-imposition of lockdown in December 2020; Here’s the truth

Fact Check: Home Ministry has not asked people to refrain from buying products made in China