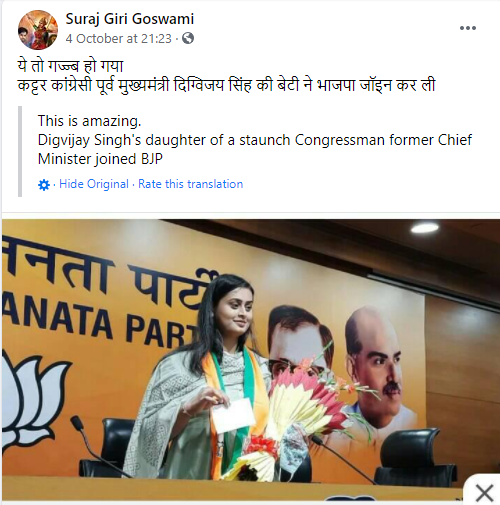 Here’s the link to the post.
More posts can be seen here, here, here and here.

NewsMobile fact-checked the post and found the claim to be misleading.
We found that the viral claim originated after a gaffe by Aaj Tak (which has since been updated and corrected), where they falsely quoted that Shreyasi Singh is the Congress leader Digvijaya Singh’s daughter. 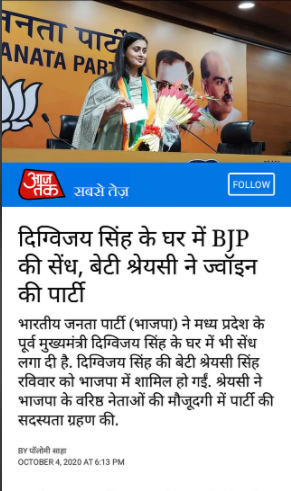 Aaj Tak also added a note at the end stating that in the above article, the name of Digvijay Singh was wrongly written as ‘Former Chief Minister of Madhya Pradesh’, which has been corrected.

Calling out the false article, Digvijaya Singh took to Twitter to clarify that Shreyasi Singh is not his daughter. 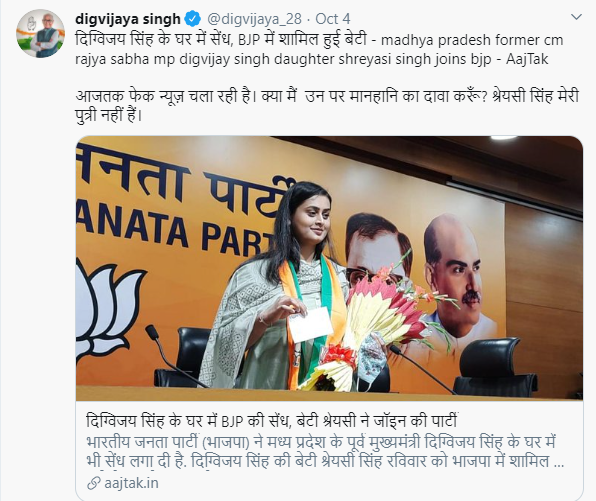 Shreyasi Singh, who won gold at the Commonwealth Games in the women’s double-trap shooting in 2018, joined BJP on October 4, 2020.  In a post by BJP Bihar, it is mentioned that she is the daughter of former Union Minister Digvijay Singh.

Shreyasi’s father, Digvijay Singh was an Indian politician from the state of Bihar, who represented Banka in the Lok Sabha a few times. He was elected to Rajya Sabha twice.
Hence, from the above fact check, it is clear that Shreyasi is NOT Congress leader Digvijaya Singh’s daughter but her father was an MP from Bihar, but with a similar name. And hence, the above post is misleading and false.