A picture-post is making rounds on messaging platform WhatsApp showing cops holding the gun against prisoners with the text:
“China executes 26 corrupt politicians, why can’t our country do it ?? Forward to all” 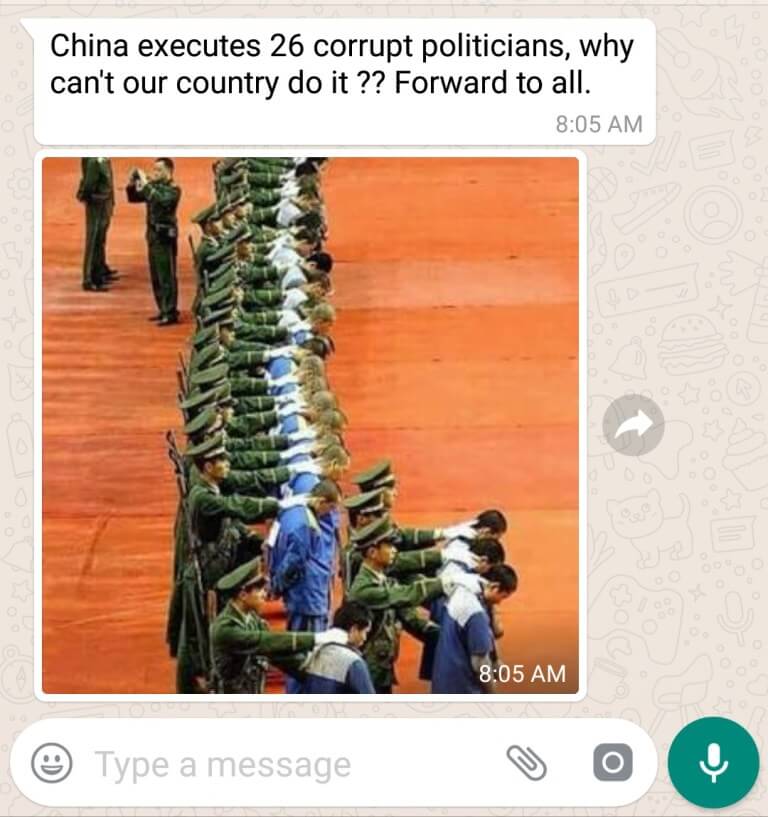 China executes 26 corrupt politicians. This is from FB. In India corrupt leaders throw bones to Indian citizens and they start praising them, voting them and finally get kicked in ass.@kapoorashok25 @AshokUp54763398 @vvkashyap pic.twitter.com/xVW22yWopl
— Yogesh BJP (@YogeshKumarMJan) April 15, 2018

ALSO READ: Digvijaya Singh, that picture is originally from Rawalpindi not Bhopal

Well, when the truth behind the picture was dug in, it revealed that the claim made about the picture is FAKE.
Though the picture is real, the 26 men are hardcore criminals, not corrupt politicians.
The photo was taken in the Year 2004 in China’s Wenzhou where the Police presented their strength in a rally. The prisoners held at gunpoint in the photo are hardcore criminals and not corrupt politicians. 11 of these prisoners were later executed.

ALSO READ: This woman didn’t do bungee jumping without a rope

Getty Image Captioned the picture: “WENZHOU, CHINA: CHINA OUT Chinese police show of a group of hardcore convicts at a sentencing rally in the east Chinese city of Wenzhou, 07 April 2004, where 11 prisoners were later excuted for various crimes. Amnesty International has called for a moratorium on the death penalty in China, saying the country’s dysfunctional criminal justice system meant many innocent people were being executed, after a senior Chinese legislator suggested China executes at least 10,000 people a year, about five times more than the rest of the world combined. AFP PHOTO (Photo credit should read STR/AFP/Getty Images)”
Embed from Getty Images
So don’t fall for the FAKE post and share this if anyone forwards it to you.

This woman didn't do bungee jumping without a rope