After the Supreme Court’s landmark judgement on the Ayodhya land dispute on Saturday, (November 9th, 2019) a scanned copy of a letter is being shared on social media and it is being claimed that it was the congratulatory letter by Prime Minister Narendra Modi to the Chief Justice of India, Ranjan Gogoi.
Bangladesh based, Moshiul Alam Sarker, shared the copy of the letter on his Twitter handle. 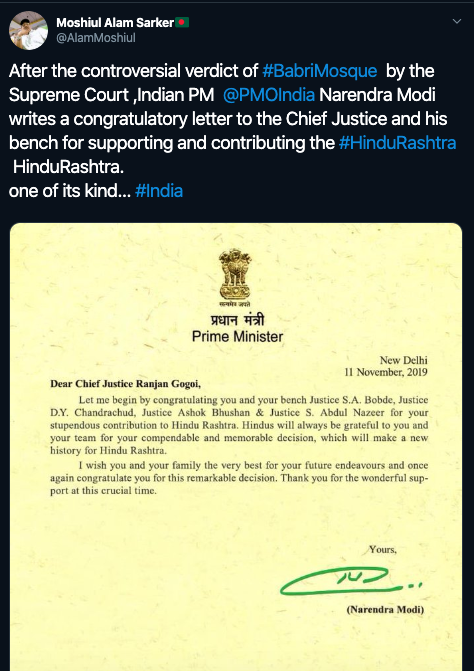 ALSO READ: Were Pakistani flags hoisted in Jalandhar? Here’s the truth about this…

After the controversial verdict of #BabriMosque by the Supreme Court ,Indian PM @PMOIndia Narendra Modi writes a congratulatory letter to the Chief Justice and his bench for supporting and contributing the #HinduRashtra HinduRashtra.
one of its kind… #India pic.twitter.com/7zMT8tymuT

PM India Narendra Modi writes a congratulatory letter to the Chief Justice & his bench for upholding & contributing the Hindu Rashtra.
One of its kind !! pic.twitter.com/2eYNIXofYk

When NewsMobile fact-checked the above post we found the letter to be FAKE.
The Indian High Commission in Dakha in a press release clarified that Prime Minister Narendra Modi did not write any letter to the Chief Justice of India after the Ayodhya Judgement.

Meanwhile, MEA Spokesperson, Raveesh Kumar, retweeting the press release wrote: “We strongly condemn those responsible for deliberately spreading such fake and malicious news, to divide communities, create disharmony and undermine friendship between the people of India and Bangladesh.”
In conclusion, it is clear that PM Modi didn’t write a congratulatory letter to CJI Gogoi.